Flooding and the working of an scene

2019 has been one of the wettest years on record in Minnesota.  I know I've seen flooding in places that I never have before.  For instance, I have never seen this dock flooded before: 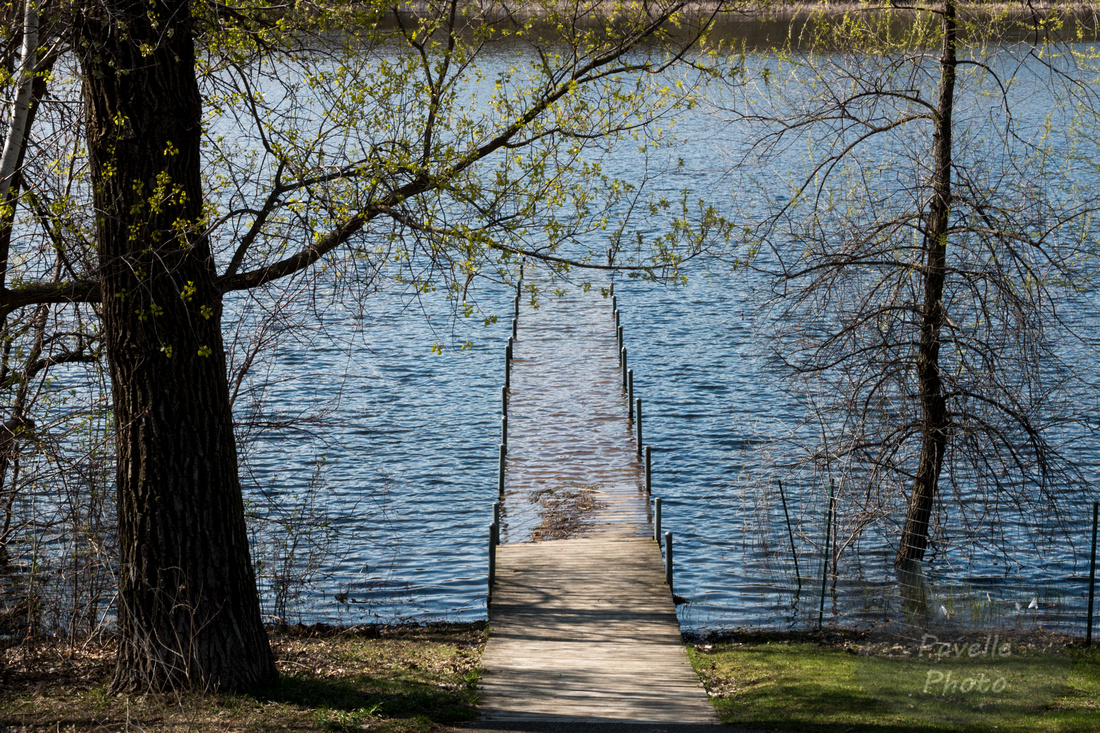 This photo was taken on May 5.  It has only gotten worse as the year has gone on.  For instance, here's a shot taken August 22. 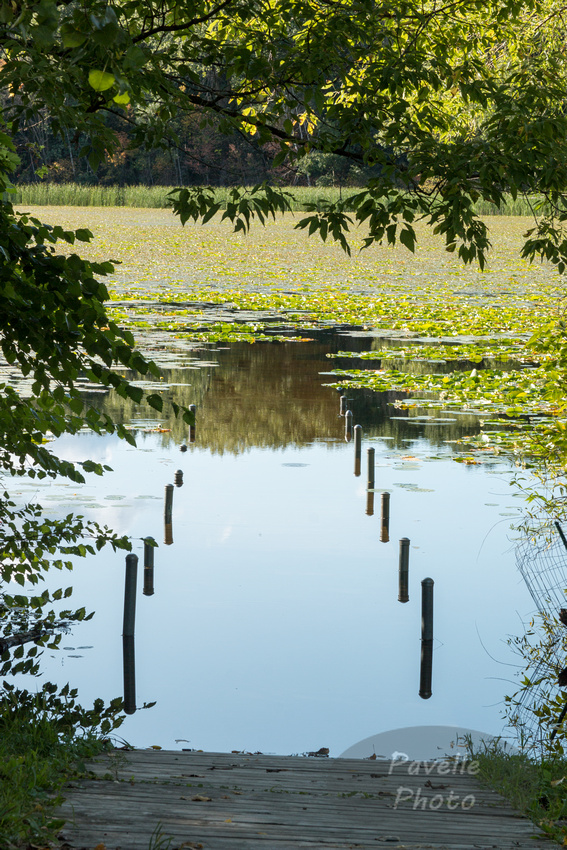 To better compare, note that the waterline in the first photo is just past the second set of dock posts.  In the second, the water is past the shoreline, and only 8 sets of posts are visible compared to 12 in the first one.

However, the flooding is only incidental to the image I want to discuss here.  What really intrigues me about this scene is the way the dock disappears into nothingness, with the posts sinking and converging to a vanishing point on the shoreline.  So, how to capture that feeling.

The first option was, obviously, shoot the dock.  Based on the top image, I knew this wasn't something that I could capture with a telephoto lens; the trees are distracting and I couldn't get an angle that was satisfactory.  So, something wide-angle seemed the best bet.  As you can see in the below image, the converging lines of the dock posts do show up nicely.  However, there are several aspects to this image that are unappealing.  First, the sunlight on the dock is too reflective (meaning it stands out too much against the water).  Also, I don't like the piles of dead leaves and such in the middle.  Finally, I'm not fond of the way the bottom of the image works.  To better give the feeling of receding lines, I think the dock needs to fill the bottom of the frame. 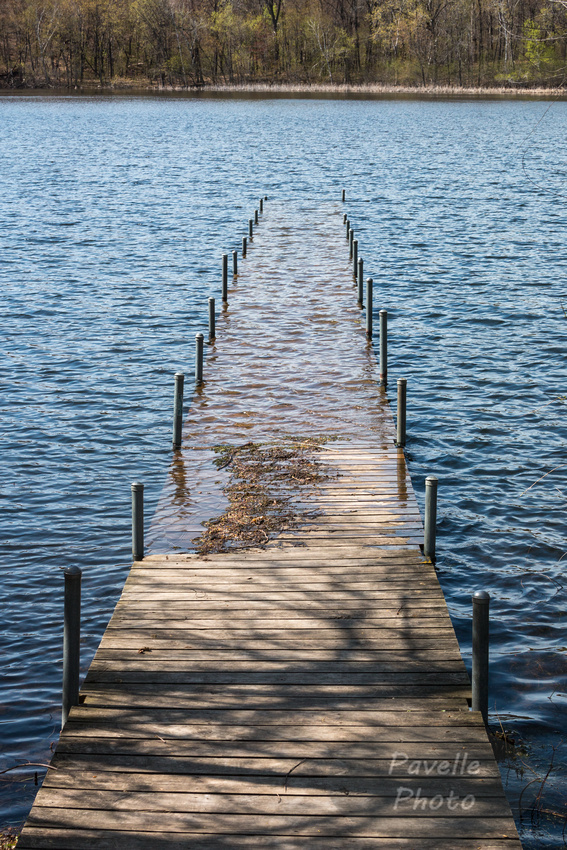 My next set of attempts happened on an overcast/drizzly day.  The lack of glare is much better, but the dock itself is still too different from the underwater parts to get the proper feeling.  Also, the tree branches on the right are distracting.  However, I do like the bit of sky showing at the top, so that is definitely something to work with. 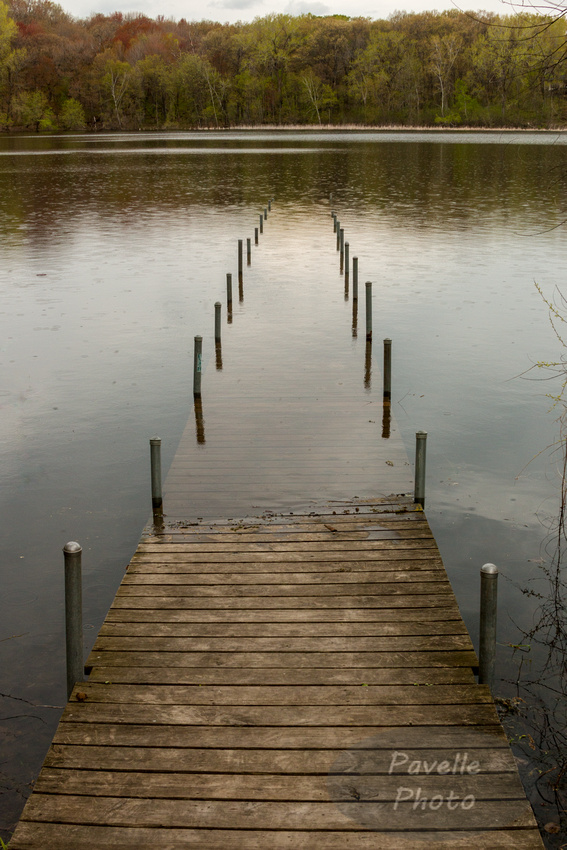 This one was a significant step closer to what I was after.  I thought at the time that having a bit of the dry dock visible would help anchor the image and make it clear that the dock is under water, but instead I find it really distracting.  At the same time, the posts at the base are prominent but don't add anything, so future images don't want them.  I also realized that I'd need to clean up the waterline to get rid of random floating stuff.  On the plus size, I really liked the way the clouds look reflected over the dock.  They add some framing to the dock slats that I really like.  [FYI, while going through images to put together this article, I found an image that, with a little cropping, fixed all those problems.  It is included below.] 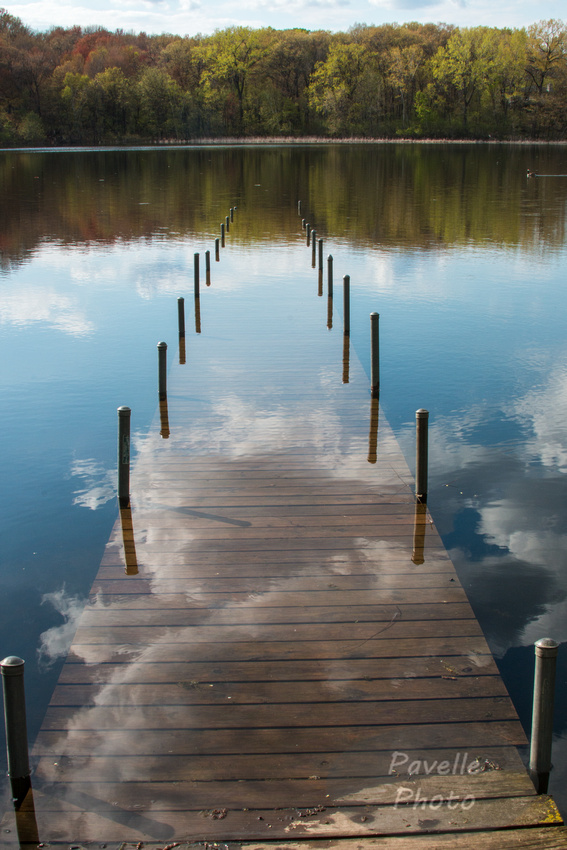 This next one has some different issues.  First, I wanted to see whether eliminating the trees would enhance the perspective, but there's too much relatively empty space.  Second, the sky was too overcast.  Compare the color in the below image to the one above and you can see what I mean.  Nothing stands out. 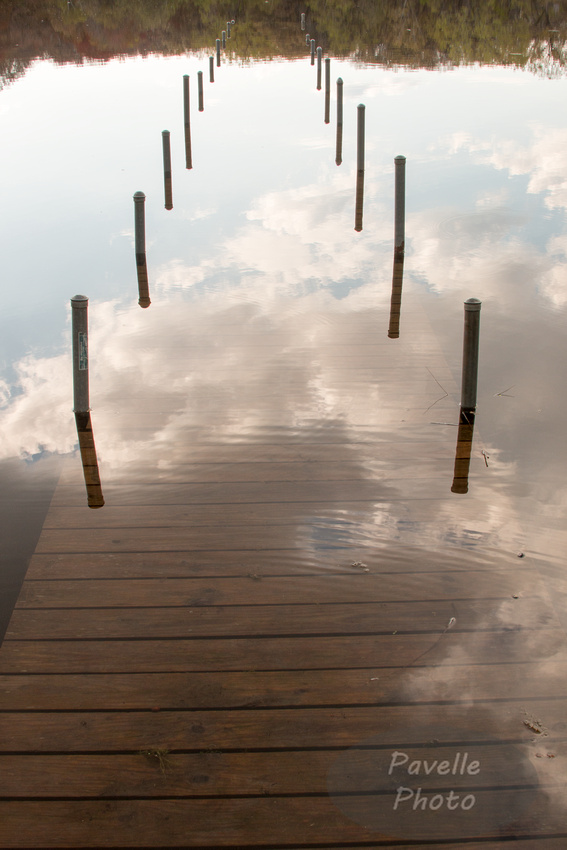 The final issue that needed to be resolved was orientation.  All the ones above were portrait, but I thought landscape might also work.  Comparing these next two images I find that the dock doesn't stand out enough in the landscape photo, even though I do like the way the clouds frame it. 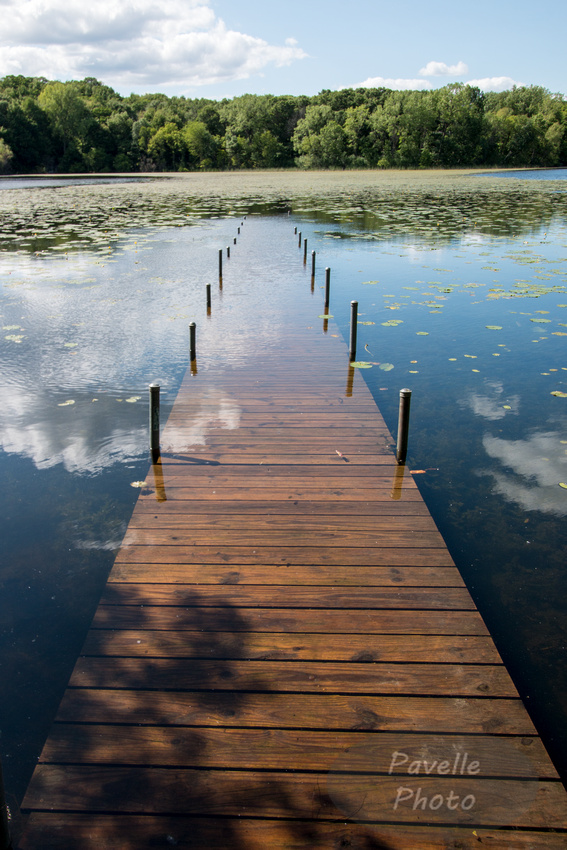 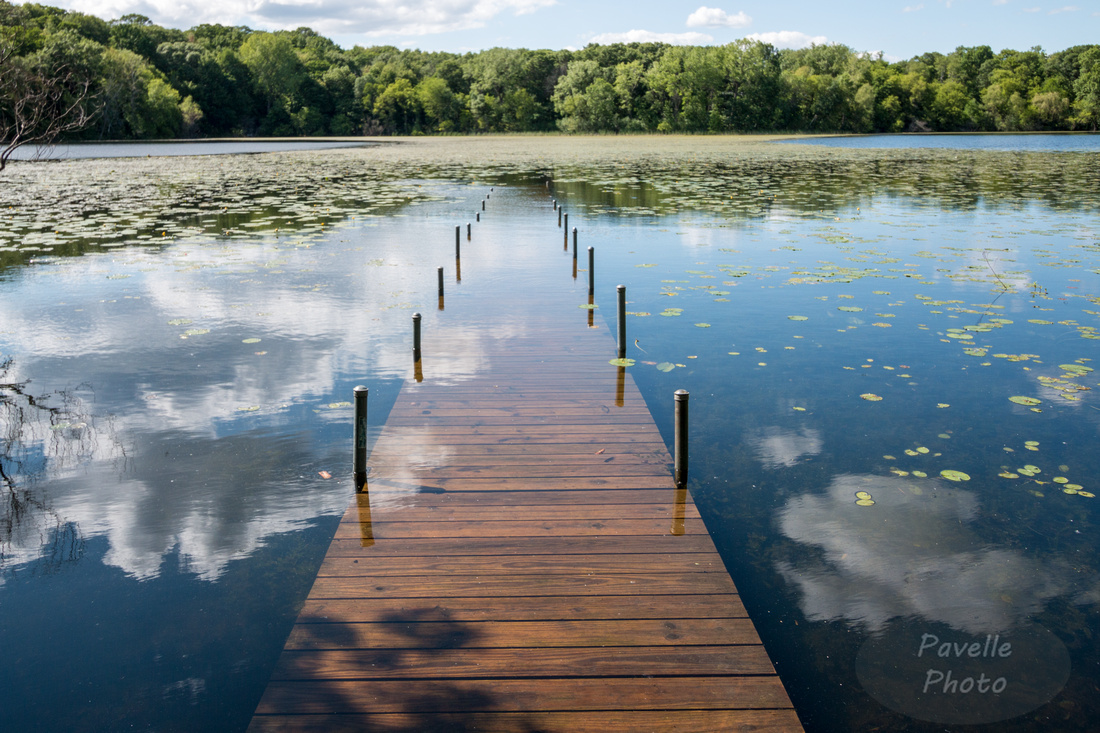 So, I knew I needed a partly cloudy day with enough blue sky to set off the dock, but with enough clouds to provide texture and interest on the dock.  Here are my two favorites.  This first one is the cropped image I mentioned above.  The clouds are nicely place while still allowing the dock to be visible in all the darker areas. 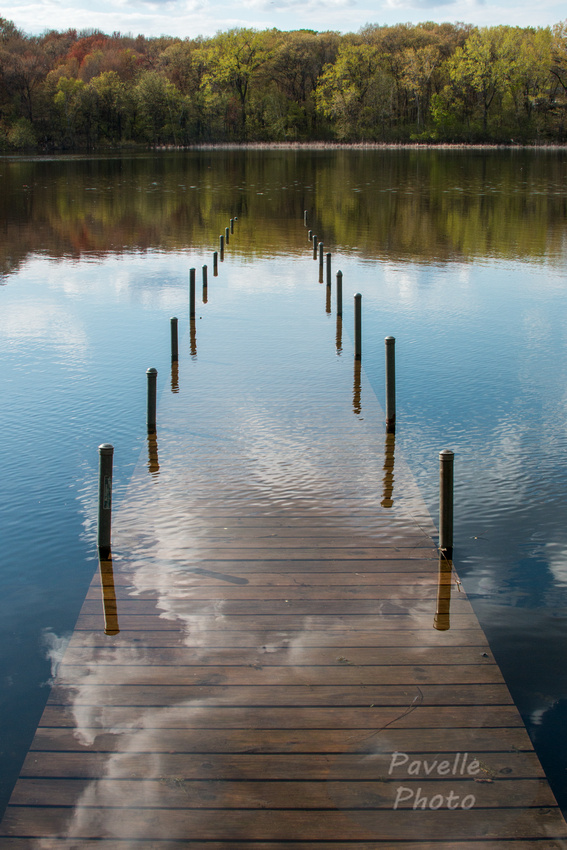 Here's the second one, and my personal favorite.  Enough of the dock is visible under the water to know what you are looking at, while the clouds give really nice texture to all the different parts of the lake (and the actual sky, for that matter).  Plus, being later in the summer, the assorted lilypads provide a nice frame to the dock, letting the empty space stand out. 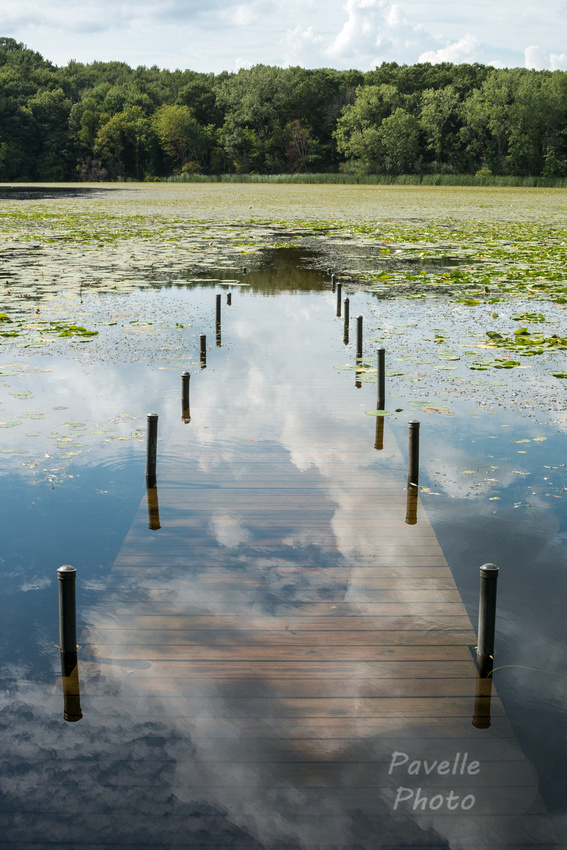 Maybe sometime in the fall the water will recede enough to try making some new images.  Plus, fall colors might add extra interest.  Until then, though, there's not much to shoot unless I try wading out on the dock, which doesn't seem very safe, and I'm not sure if the ripples from standing there would work in the photo.

Addendum #1 - On a couple of occasions there were waterfowl that could be caught in the shot.  In both cases, I found that they really didn't add all that much.  This first one is a Canadian Goose that was swimming past.  I timed this shot so it would be in the middle of the vanishing point formed by the dock posts. 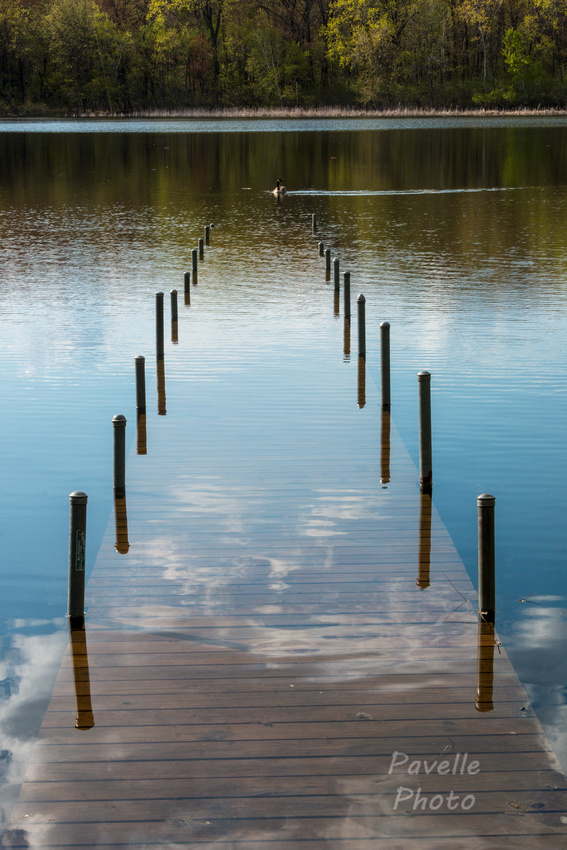 This one is a mallard that was swimming around the lake, up and down the dock area.  It stopped to dry off its wings and I got some shots.  Again, it is fun, but kind of distracts from the image. 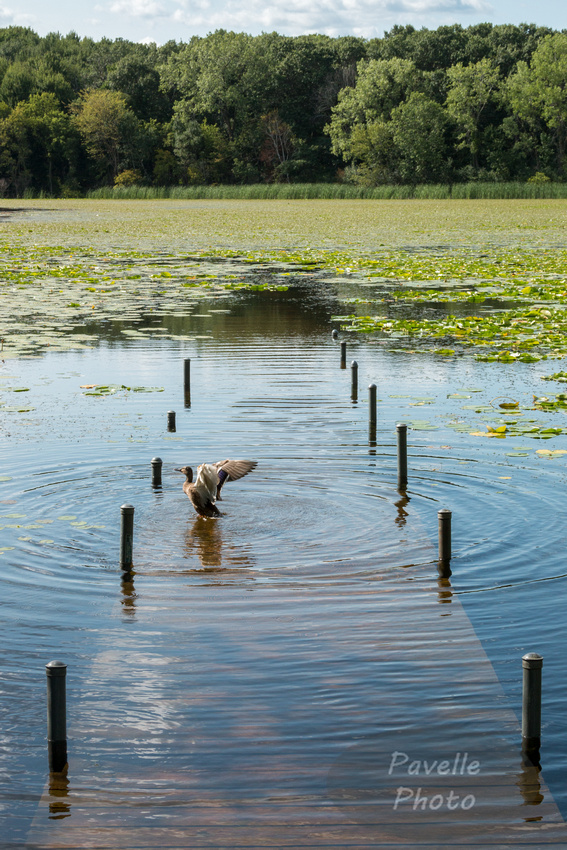 Addendum #2 - After looking them over, I though there might be enough contrast and shapes to make an interesting black and white photo.

This first one looks decent, but you can't tell that the dock is underwater until the water starts rippling about a third of the way from the bottom.

This one works better, but it doesn't flow together nicely.  There's the trees and reflection at the top, empty dock, and clouds over the dock, but for some reason they don't feel tied together. 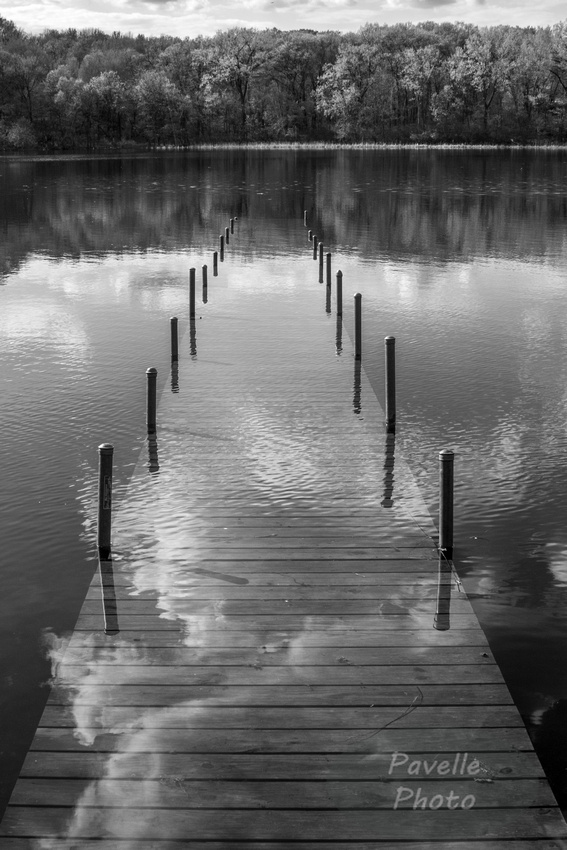 Here's my favorite one.  The textures work well.  The clouds and lillypads tie the image together.  I'm just not sure if there is enough of the dock clearly visible to make it work in the same way as the color versions. 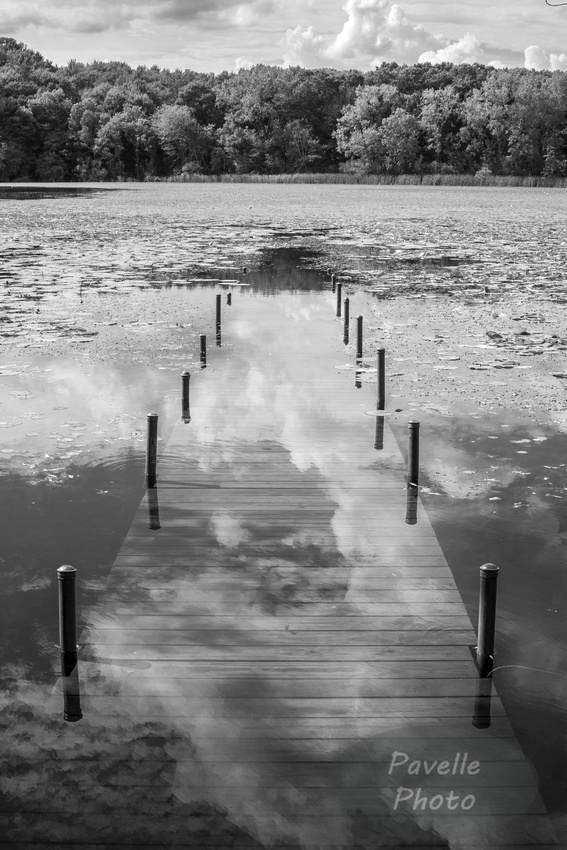