Photos of the Week - Another one for the Birds

Bald eagles are pranksters.  Here's how I know.

Sunday was REALLY nice.  Maybe a bit windy, but sunny and warmer than it has been (20 degrees warmer than today, for instance).  So, after going out for a cup of coffee, I decided to stop by Lone Lake to see what was around.

Shortly after I got out of the car, a nice gentleman came up and asked if I had seen the bald eagles.  My answer was no, I had never seen ones at Lone Lake (several in the area, but never there).  He had seen three playing around there the day before and one was fishing earlier in the day.  Then he pointed and asked "Isn't that one in the tree over there?"  Sure enough, part way around the lake was a bald eagle...my first of the year.  So I decided to wander over and try to get a closer shot.  He said it wasn't worth the effort since it would probably fly away before I got close enough [note:  this was said aloud; you can see where this is going].  I'd seen bald eagles sit around in a tree for an hour or so when it felt like it, so I decided to try anyway.

About 2/3 of the way to where I had seen the eagle, I heard woodpeckers tapping.  Looking around, I saw a downy woodpecker in a tree off to the right (no good pictures, too many branches in the way).  In front of my, though, I spotted this little guy. 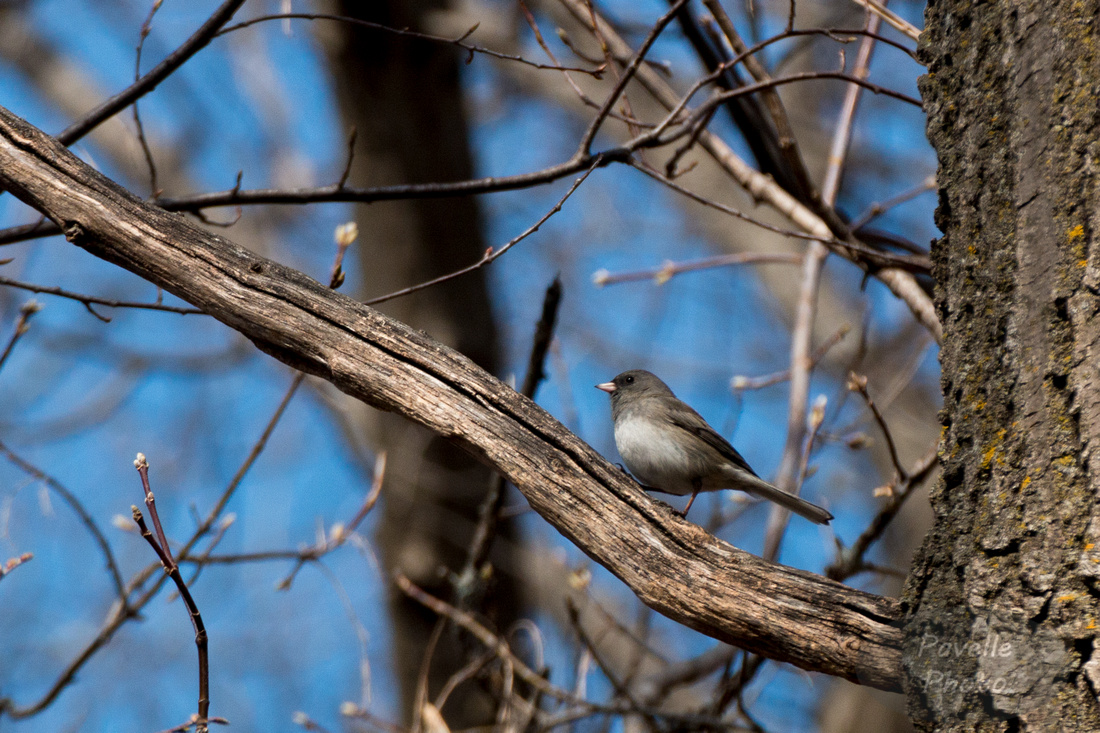 This is a dark-eyed Junco.  A new type of bird to me (meaning I may have seen them before but never got a shot).

And, as I went another 10 feet or so, I saw the bald eagle fly away, just like the guy by the parking lot told me it would.  Fortunately, I could still hear some woodpeckers, so I continued on.  A red-bellied woodpecker was soon spotted.  The big problem with capturing good images of these birds is that they usually move all around a tree trunk, so it takes time to move slowly so as not to scare them away. Once I was satisfied with the shots I had gotten (and the woodpecker had flown away), I returned to the dock by the parking lot.  There I ran into the same gentleman as before who asked if I had gotten my eagle shot, since it had just flown a little bit farther away from me.  I answered no, since I couldn't see where it went.  He also mentioned that it then flew around the lake looking for some fish, but at that point had flown away.

So, disappointed at not getting a picture but happy to have seen it and gotten the woodpecker as a consolation prize, I thought I'd walk around the lake for a while.  First, though, there was a lady sitting down on the dock with a big lens (600mm) and nice looking camera.  Never one to pass by another photographer, I stopped by to say hi.

She mentioned having gotten some nice shots of the eagle with a fish in its talons the day before, as well as some fun ones of the seagulls that I could see flying around.  So I stayed and chatted and shot seagulls for a while. 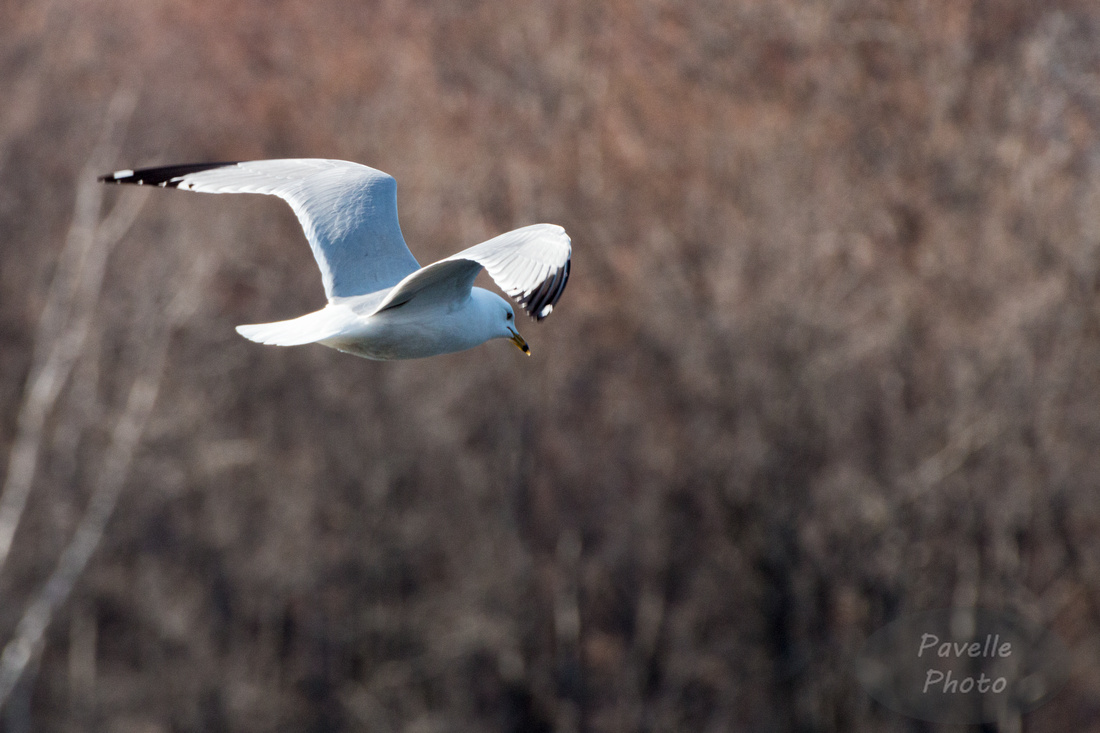 I love the texture on the wings.  Enlarged you can clearly see the pattern of the white feathers. 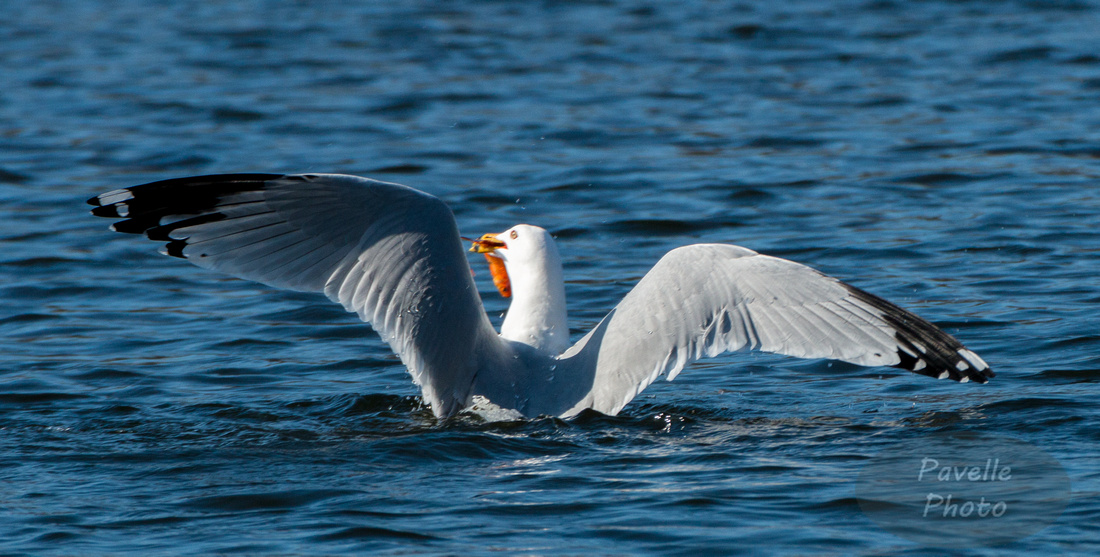 [Note:  This one looks to me like it is holding up its wings in victory, so I'm titling it "Ta-Dah!"]

After an hour or so of shooting gulls, and with no sign of eagles, I decide to go for my walk.  I say goodbye and that I'd be back in a while and thank my shooting companion for a nice chat.  As I get to the start of the path around the lake, she calls out to me "It's back!" and back I go to the dock.  And there's the bald eagle flying around on the other side of the lake. 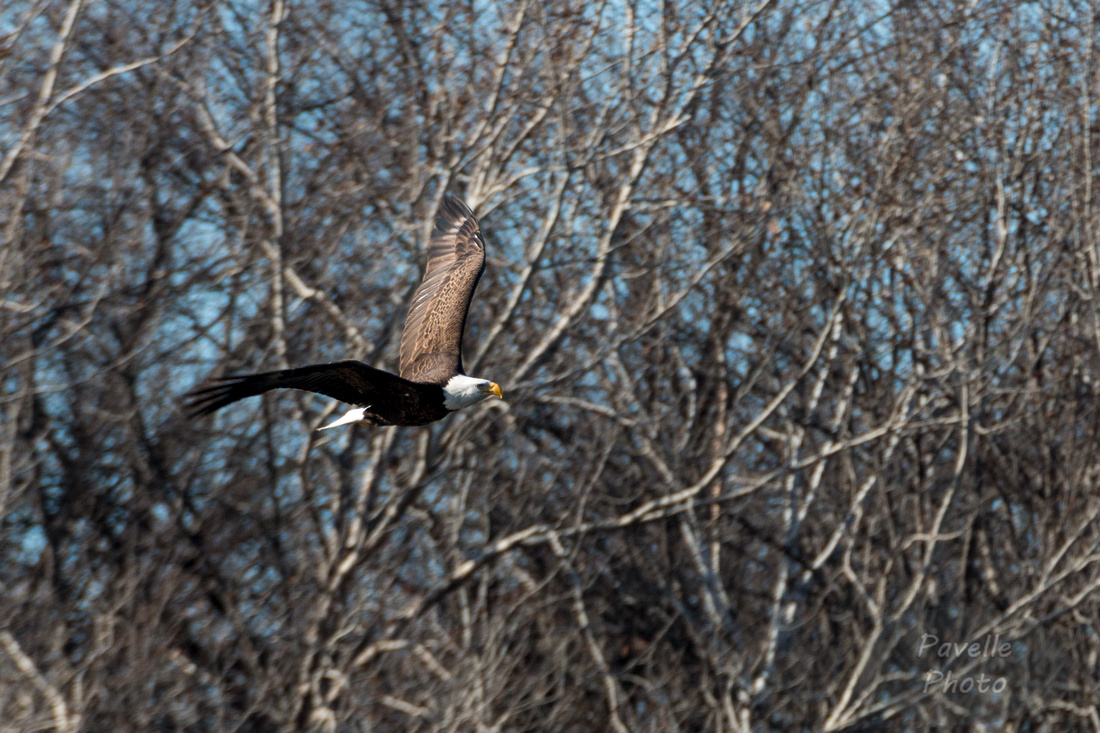 I get a few usable shots (like this one) in the next 5 minutes or so and then it flies off again.  But, my appetite whetted, I stick around for another 45 minutes until the coffee I had drunk before getting to the lake catches up with me and I need to wander away for a bit.

When I get back, maybe 5 minutes later, I am told that the eagle had made another appearance, again right after I had left.  And I am jokingly told to go away again so that it will come back (remember, prankster). 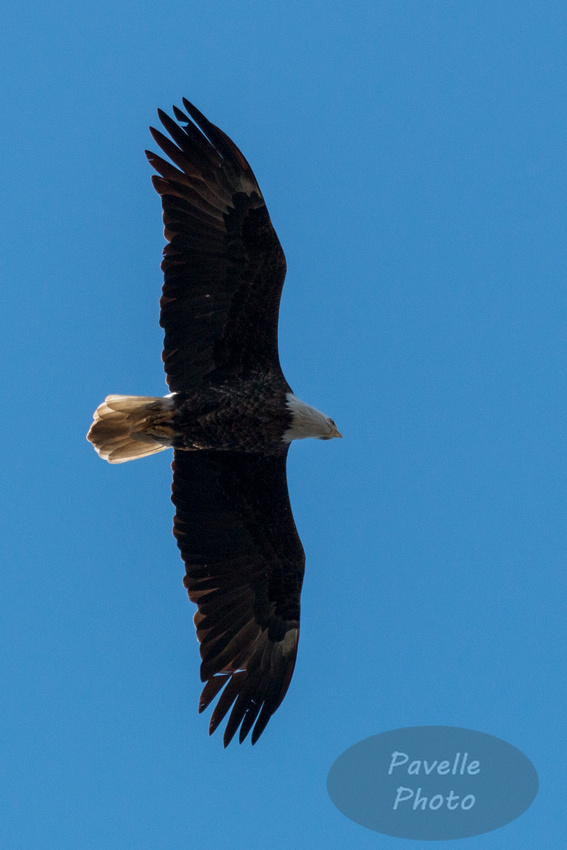 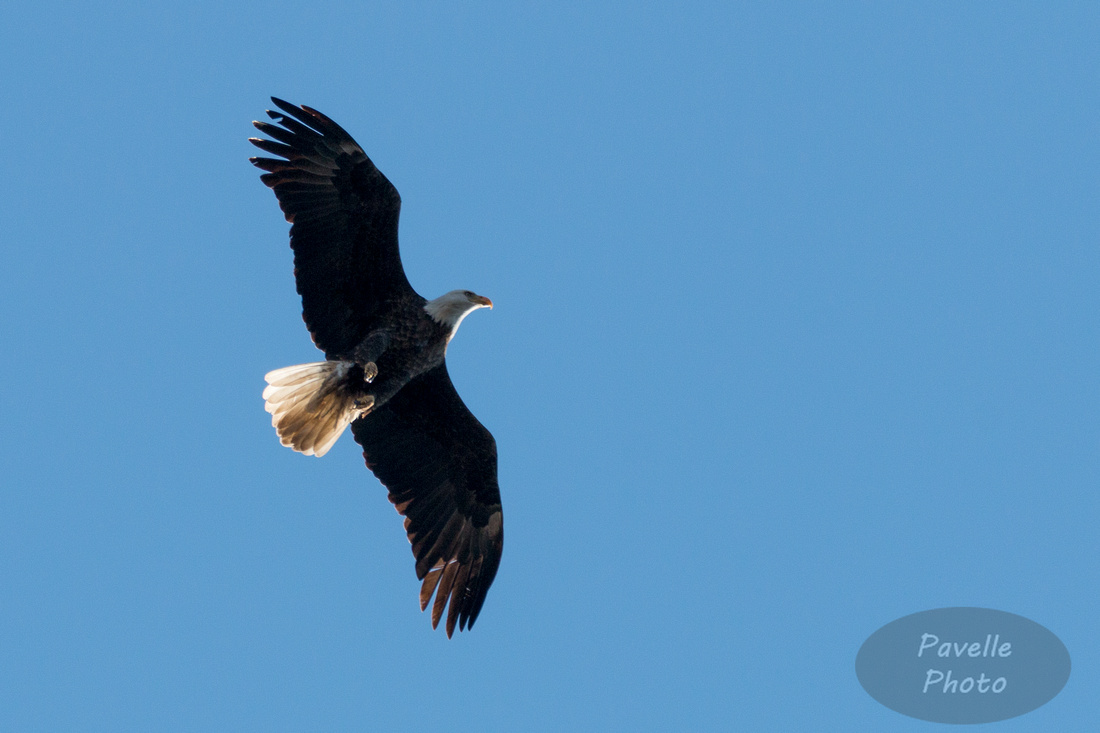 Eventually, the eagle does return, flying circles overhead looking for something to eat.  Besides my occasional frustration with the autofocus on my camera throwing everything into disarray, I do manage to capture some nice flying eagle shots.  Unfortunately, it doesn't spot anything edible and, instead, lands in a nearby tree.

Of course, it has to land in a tree right behind a branch that cuts through the head when it is upright, or casts an annoying and distracting shadow when it isn't.  But, I lie down on the dock to change my angle a tiny bit and, when it is scrunched down a bit more to preen its feathers, I do manage to get some clean images.  And, after a while it flies away.

By this time, I'm excited for it to come back, so I stick around a while longer.  But, it is slowly getting colder and the wind is still blowing and my hands are getting cold.  So, I decide to leave.  And, as I stand up to go, here comes the eagle again [note: that's the third time it has done so as I am leaving the dock area, and fourth since I got there; prankster].