Photos of the Week - Moral Quandry

Last week I was out at Lone Lake, wandering around as usual and taking some pictures.  When I arrived I notice that the moon was out even though it was over an hour until sunset, so I snapped one or two shots to see if I could get anything interesting.  Not at that time.  I continued strolling around the path, checking when I had the opportunity to see if the moon was close to something in the distance so that I could get a big moon shot [note:  For those who haven't done much photography, the moon is a constant size based on the lens you are using - 1mm on a 35mm equivalent for every 100mm of zoom.  So, for example, my 100-400mm lens will give me a moon that takes up 4mm on a 35mm slide.  What this means in practice is that if you want the moon to be a prominent feature in a photograph you need to shoot it at a large zoom and against something that is far enough away to still be visible.]

As I came close to the end of the path, I saw some birds circling in the distance quite close to where the moon was.  At that point, my goal became getting a shot of a bird against the moon. 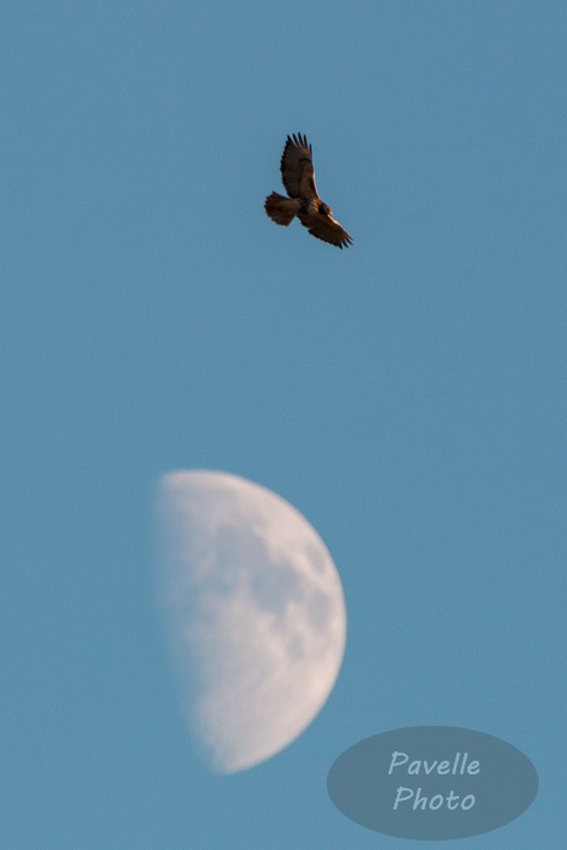 I tried tracking the birds (I think it is a red-tailed hawk, but could use some independent verification. but this proved to be very hard and tiresome since they were a good distance from me and moving quickly.  So, instead I decided to focus on the moon and shoot when one of them got in position.  And I actually manage to get one. 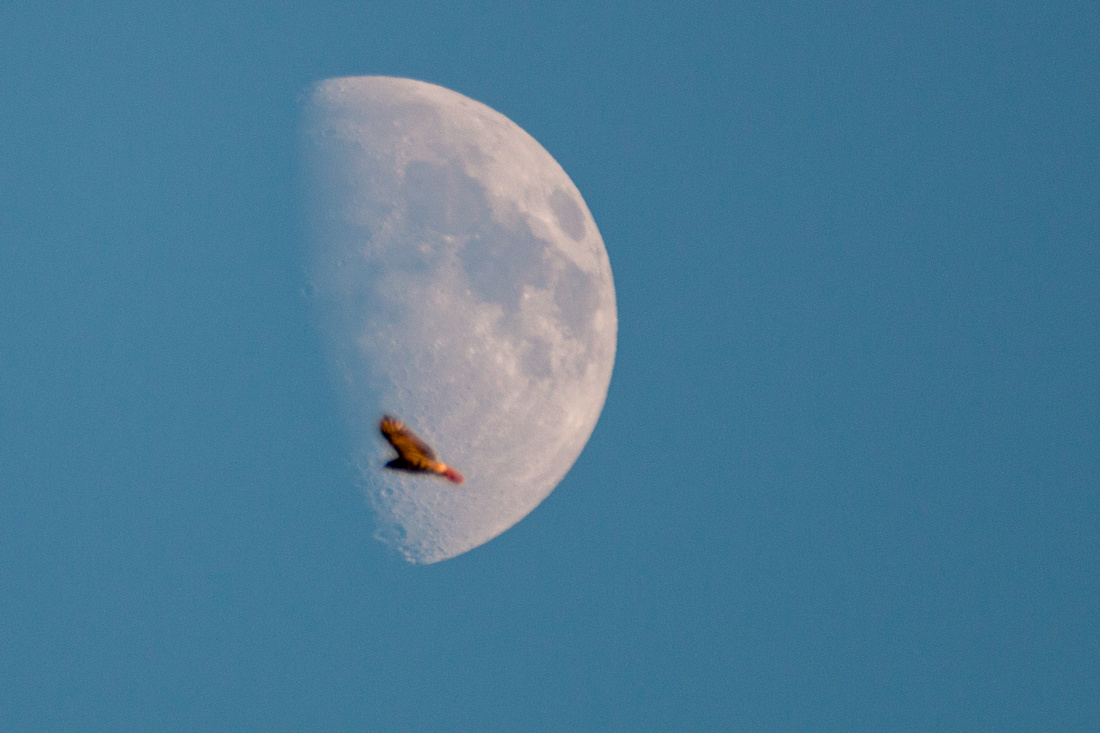 And, here you can see my problem.  In the first picture, the hawk is quite sharp, but the moon doesn't show any detail.  In the second, the moon detail is there but the hawk is not sharp.

Because these are digital images, it would be fairly easy to take a sharp hawk from one picture and put it in a different one that has a sharp moon, exactly where I would want it.  The question is whether that is cheating (or how much cheating it is or how you label the image to reflect the processing done).

What do you think?

Al Whitaker(non-registered)
First, I believe most of the serious photographers will realize a photograph containing a sharp moon and a sharp earth-based object (the hawk) is a composite because there isn't a long lens, at least one I'm aware of, that will produce that great of a DOF. Is it cheating? Yes, if it is entered into a contest where that type of manipulation is forbidden. Other than that, I say process the way you want!
No comments posted.
Loading...
Subscribe
RSS
Recent Posts
2019 - A Year of Few Photos Flooding and the working of an scene 2018 - Photo Year in Review A Day for the Birds Photos of the Month - Mostly Wood Lake Photos of the Week - Black and White Photos - 2017 Year in Review Photos of the Week - 7 on the line Photos of the Week - A walk in the park Photos of the Week - At the Arboretum
Keywords
photography minnesota arboretum bird flower minneapolis books birds New York City czech republic
Archive
January February March April May June July August September October November December
© Pavelle Photo
Powered by ZENFOLIO User Agreement
Cancel
Continue