Time has been hitting me hard recently.  One niece is heading off to college this fall.  Another is turning 13 this week.  It'll be 30 years since I graduted high school come June.

My favorite modern history time statistic:  Sputnik launched in October 1957.  Apollo 17 was December 1972.  That's only 15 years between the start of the space age to the end of manned exploration of the moon (and 12 men having walked on the moon).  And it depresses me that I probably won't have a chance to do so myself. 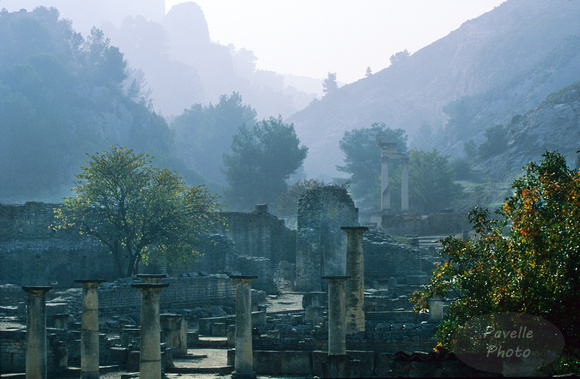 This image was taken at Glanum in Provence France.  Glanum is the remains of a Roman-era city.  At one point I was thinking of titling this photo "The Mists of Time" since I love the way the details fade into the mist the farther back you go, reflecting our distance in time from when the city was alive.

One last thought:  Back in college I studied Old English for a while.  It turns out that one of the largest amounts of Old English poetry that is still extant are riddles.  And of those riddles, a good percentage are sexual puns or other "blue" material similar to what you get nowadays.  I find this very comforting.