Photos of the Week - Sometimes you get lucky!

Sunday was one of those perfect days in the year.  Temperature in the mid-70s, not too humid, occasional breeze.  One of those days that you have to get outside and do something.  Go for a walk, take some pictures.

At first I thought I'd go out to Lake Calhoun and see what was around, but I had other things going on that made it inconvenient.  So, instead, I decided to finish the book I was reading and go over to Lone Lake and see what the path down to Bryant Lake was like. 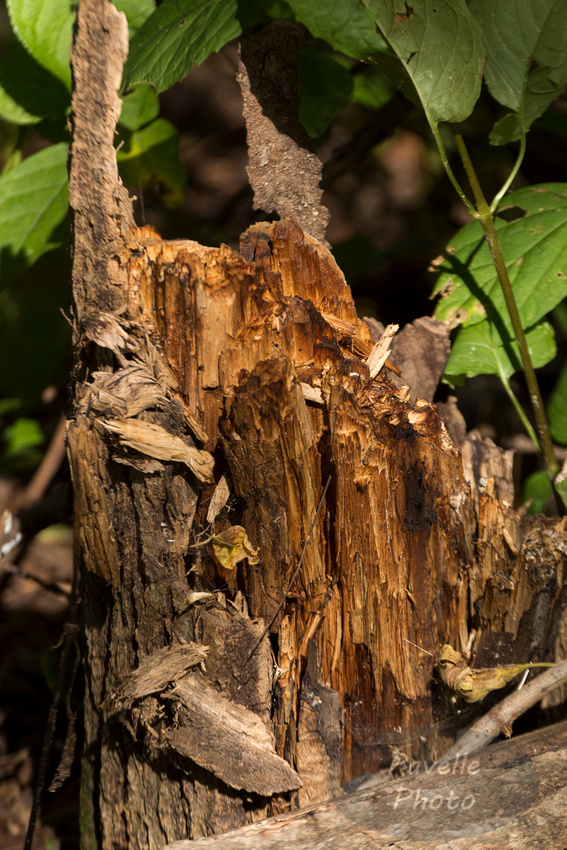 Not much was of interest at the lake itself; the water lilies and lotuses were basically gone.  I did come across a small broken tree stump that I likes.  Took a couple of shots and continued.

A little ways past, I heard a quiet thumping, rhythmic.  Similar to woodpeckers that I've frequently heard there, but much deeper in tone.  Probably from a dead tree with thick bark.

I heard it again and looked up at the tree I was next to.  No sign of anything.

A couple of steps up the path and I could see the other side of the tree.  And there it was.  The woodpecker I had heard.

Now, if this was a normal excursion, I would have taken a couple of shots of a downy or hairy woodpecker and continued on my way feeling please with having seen them.

But it was not a normal excursion nor a normally spotted woodpecker.

No, this was a pileated woodpecker.  The kind Woody was based on.  The kind that has teased me for years without providing a chance at a photo.  The kind I've been wanting to get a good image of for over 15 years. 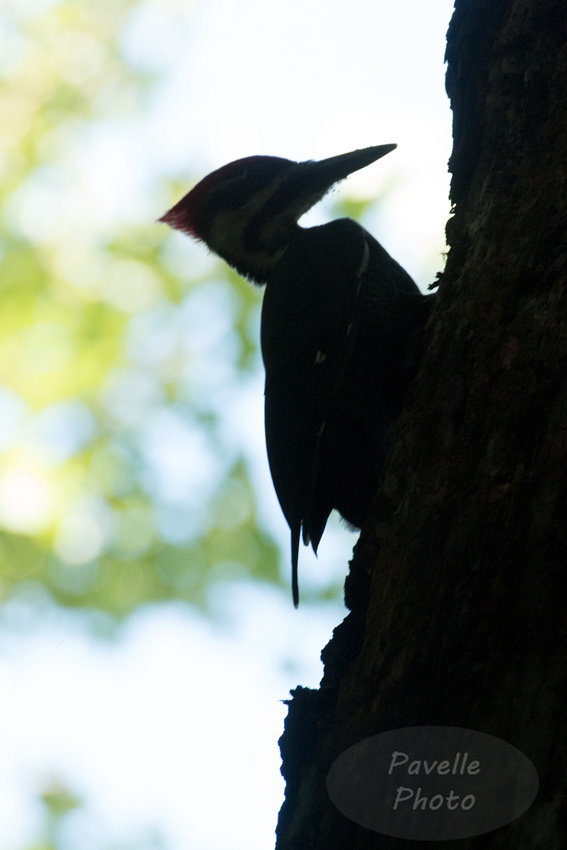 I start shooting and smiling.  But, there is a lot bright sky, which leads to silhouetting.  So, I overexpose some shots in order to get the bird bright enough to see.  And, change to auto-ISO so that I can concentrate on getting the depth of field deep enough and still fast enough to stop motion. 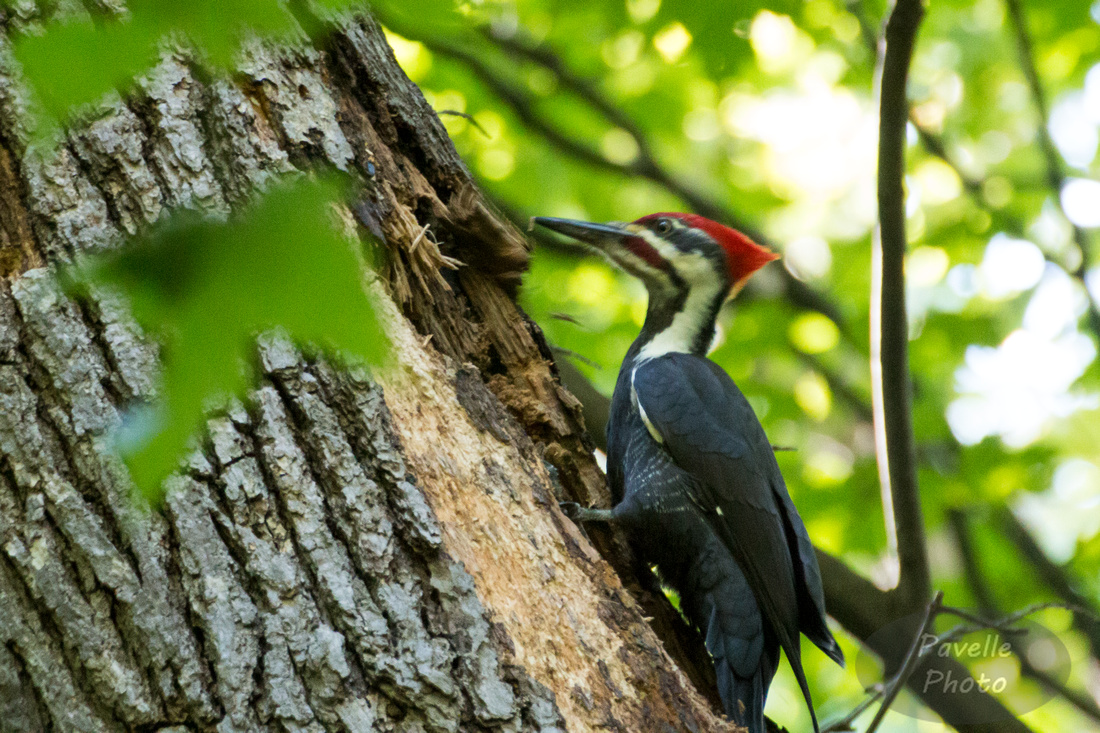 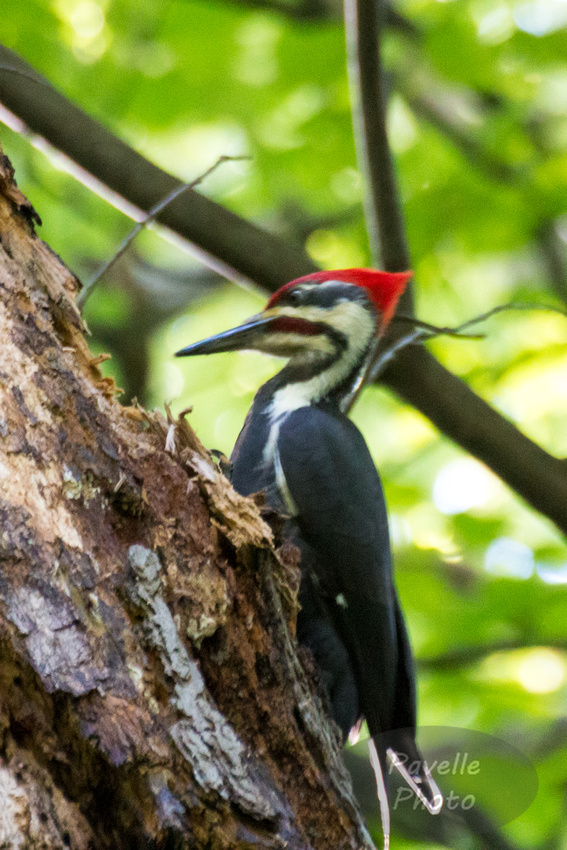 The bird jumps to the side of the tree away from me, so I go back to the other side and try and get some more shots.  But, it is amongst some leaves and not clear.

I back up hoping to get a better angle, and capture the first couple of clear images.  Boy is he wonderful (and yes, it is a male - females have a black forehead and don't have the red moustache).

But, I'm too far away, so I make my way back up the hill and to the side. 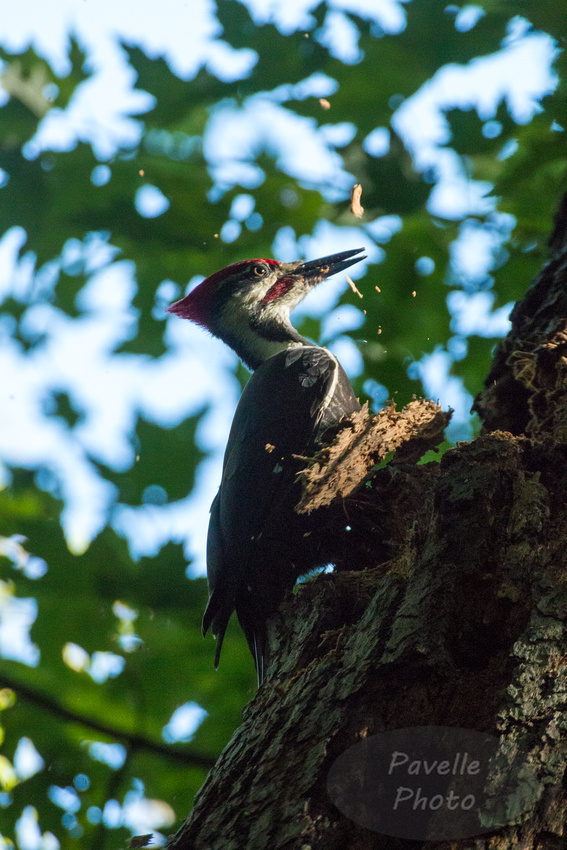 As I get close again, it occurs to me that I haven't actually heard it pecking in quite a long time, even though I can see him doing so.  Then, some tree bits start to fall.  Peck and clear..peck and clear. 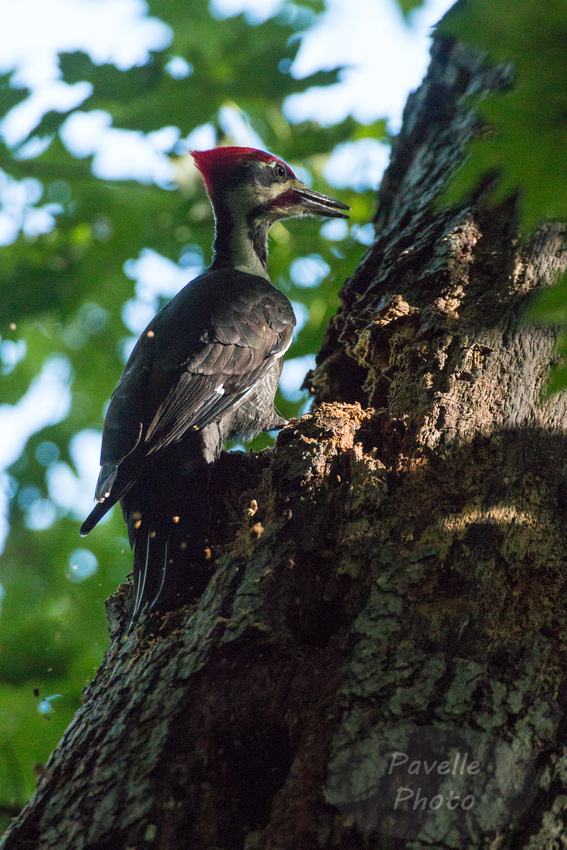 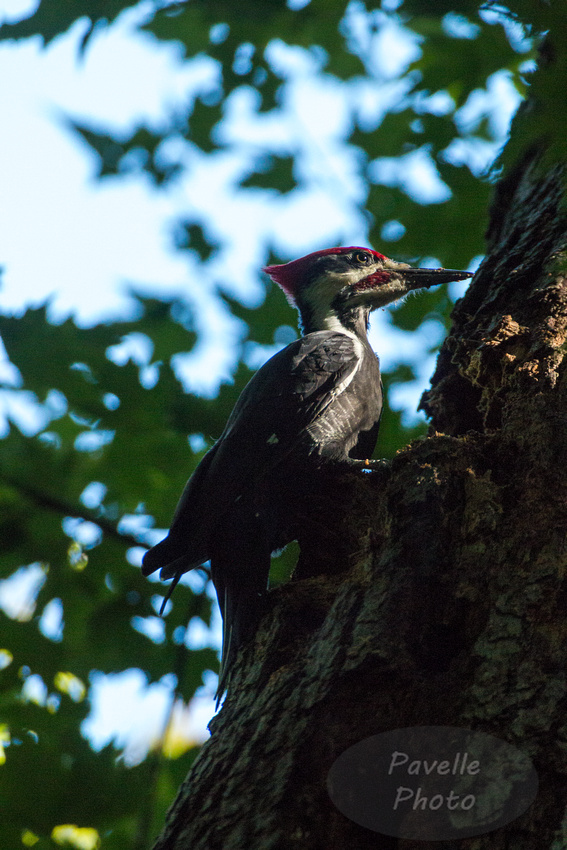 A beam of light shines right by the head.  The head disappears when he pecks and comes into the sun when he stops.

I'm at this for somewhere between 5 and 15 minutes and my shoulder really starts to ache from holding the camera and lens steady above my head.  So I bid him a fond farewell and continue on my walk as planned.

Did I find anything else interesting on the walk?  Butterflies - not really, other tree stumps - not really, deer - no, other birds - no.  Do I care?  Sure, because it would be nice to capture those as well.  Does any of that affect my enjoyment of the day, though?  Absolutely not!

And it occurs to me just how lucky I had been.  I could have gone somewhere else to shoot.  I could have been there at a different time.  Even a minute or two later would have made a difference because the pecking sound became inaudible due to him pecking in the looser dead areas, and I would have just walked past not realizing what was happening.

But, in the end, I was there and got some shots that I've been waiting over 15 years for.  Sometimes you DO get lucky.